Trying to pinpoint the exact moment that camouflage and military style in general became part of everyday fashion is a difficult task. The more you unpack, the digger you deep, the further you go, the more complicated it becomes.

The appeal of military gear is underpinned by its raw utility. Rough, rugged and built to last, iconic military jackets like the M-65 or fishtail parka have always been garments you can turn to when you need something that’s going to stand the test of time. But in many ways, the true utility of camo (staying hidden) runs completely counter to fashion’s usual number one motive – being seen.

So what is it about camo that has made it so tirelessly popular in the fashion world? Ultimately, it’s a combination of a number of factors; cultural symbolism, history and straightforward aesthetics, for example. But in my opinion, before understanding how camo became cool in an aesthetic sense, it’s important to get a bit of historical and cultural context.

For my money, one of the moments that solidified camo’s cultural significance, at least in a western context, is the Vietnam War. Running for almost 20 years from November 1955 to April 1975, the Vietnam War dominated American politics, media and mainstream culture throughout its lifetime, inspiring countless protest and anti-war initiatives and becoming one of the pivotal battlefronts of the counterculture movement. 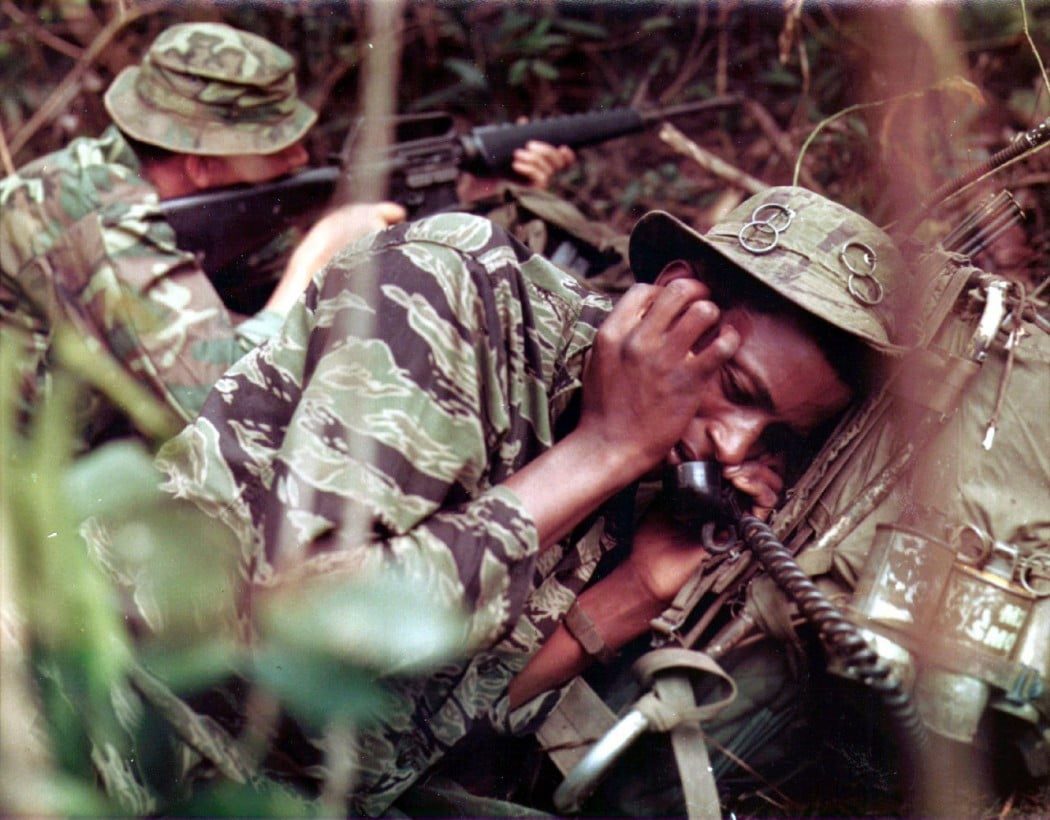 Tigerstripe uniform (foreground) and ERDL pattern (background), in use by US forces in Vietnam c.1969

While soldiers over in Vietnam were fighting a military war, America was fighting its own cultural civil war between traditional, conservative values and the progressive idealism of the free love and civil rights movements. And unlike the Korean War which preceded it, or the two Gulf Wars that followed, the Vietnam War’s bleak cocktail of rainforests, napalm, cigarettes, opium, tour jackets and tiger camo not only solidified militarism as a core element of the American identity – it created, to outside observers, an image of war that was strangely slick, sexy and cool. 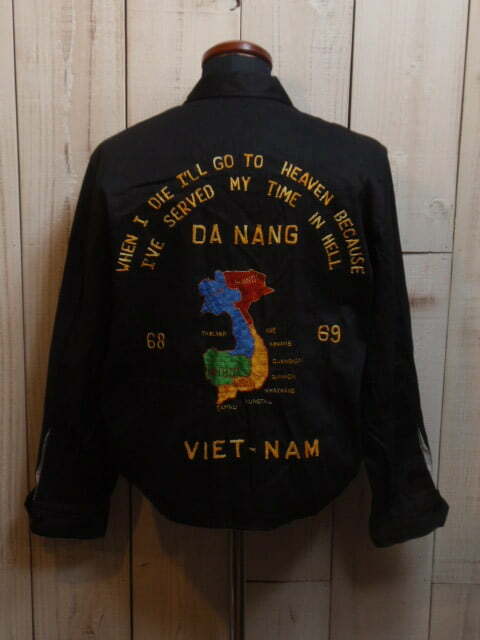 As a result, military culture became woven into the very fabric of American society in a culture in a way that it had never been before. Its effect permeated every corner of culture; bands like Creedence Clearwater Revival sung about it in their music; books like Tim O’Brien’s The Things They Carried and Robert Mason’s Chickenhawk brought harrowing tales of war back to American soil; and films like Full Metal Jacket, Apocalypse Now, released in the years immediately following the war, unpacked the horrors and trauma of the conflict on the big screen to packed movie theaters across the world. It’s worth noting that Travis Bickle, the M65-clad antihero of Martin Scorcese’s iconic film Taxi Driver, was himself a disillusioned veteran of the Vietnam War struggling to re-adjust to American life. 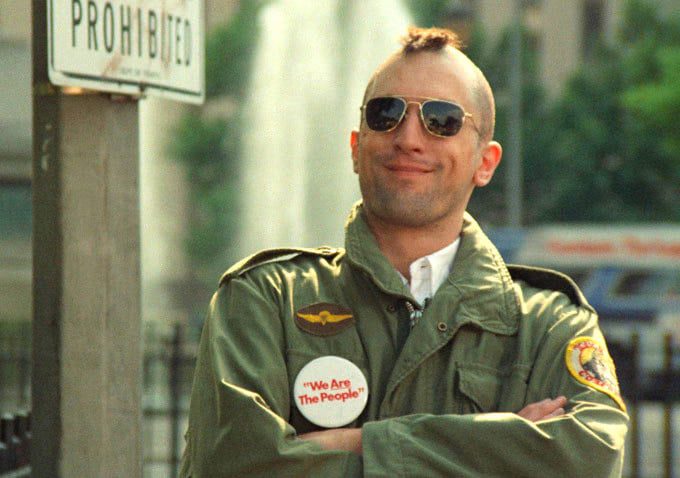 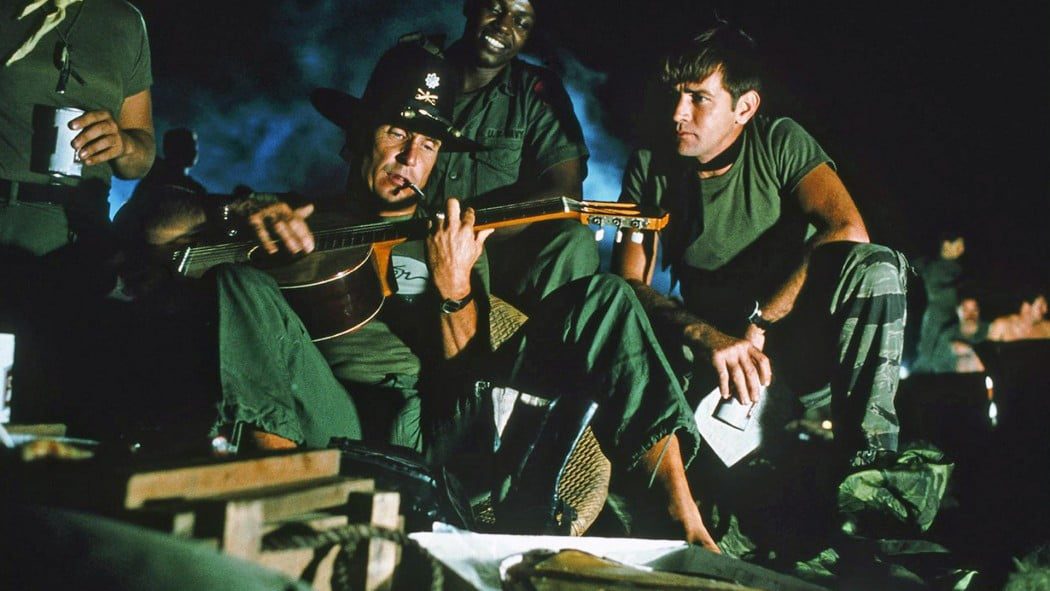 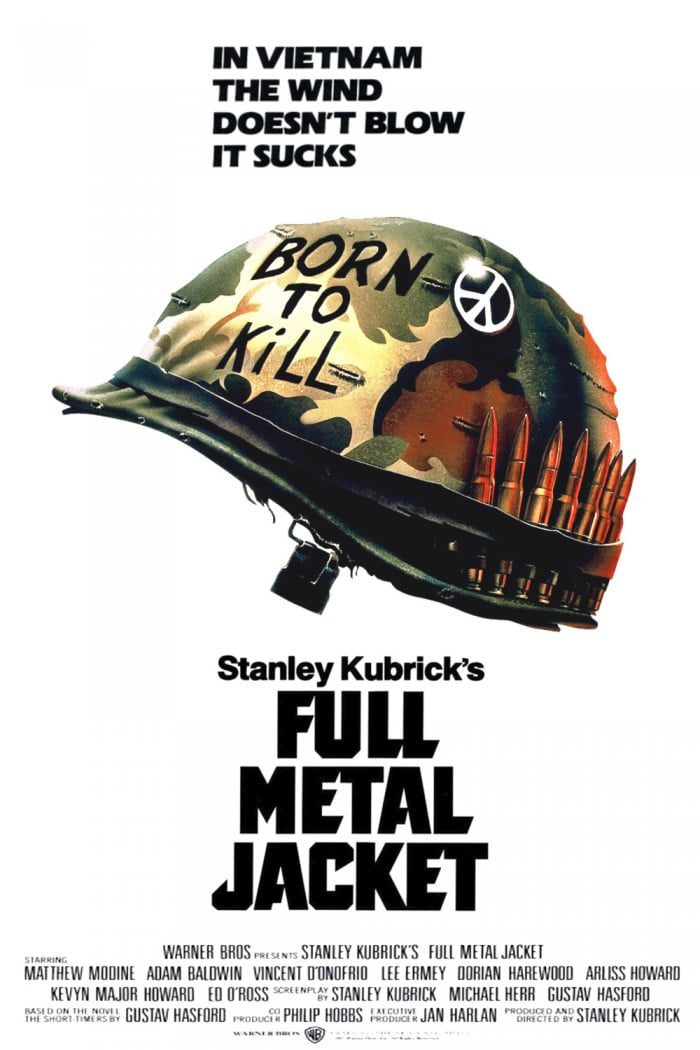 All of which is to say that, by the 1980s, military style and aesthetic was very much woven into everyday American life. So by the time we arrived at the rise of rap and hip-hop at the turn of the ‘90s, army style was everywhere. Young black rappers growing up in cities like New York and Chicago looking to dress sharp on a budget (and find clothing up to the task of standing on street corners for hours at a time in the middle of January) would have been well-acquainted with shopping at army surplus stores, and the military aesthetic lent itself to black American gang culture, where members are commonly given military ranks such as footsoldier, lieutenant and so on.

Hip-hop’s rise was coupled with the rise of streetwear, a new style of clothing built from the sidewalks up, characterized by graphic tees, baggy pants and the various intersecting styles of hip-hop, skateboarding, graffiti and dance music culture. Skateboarders, writers and ravers needed hard-wearing clothing, each for their own reasons. As a result, camo found its place in virtually every corner of ‘90s subculture.

Meanwhile, in Asia, thanks to World War II, the Korean War, the Vietnam War and several others, American military culture had already been firmly present in the continent for over 50 years. So when designers over in Japan like Jun Takahashi of Undercover, Shinsuke Takizawa of Neighborhood and A Bathing Ape founder NIGO started their brands, each an exploration of 20th century American culture in its own way, camo necessarily appeared. 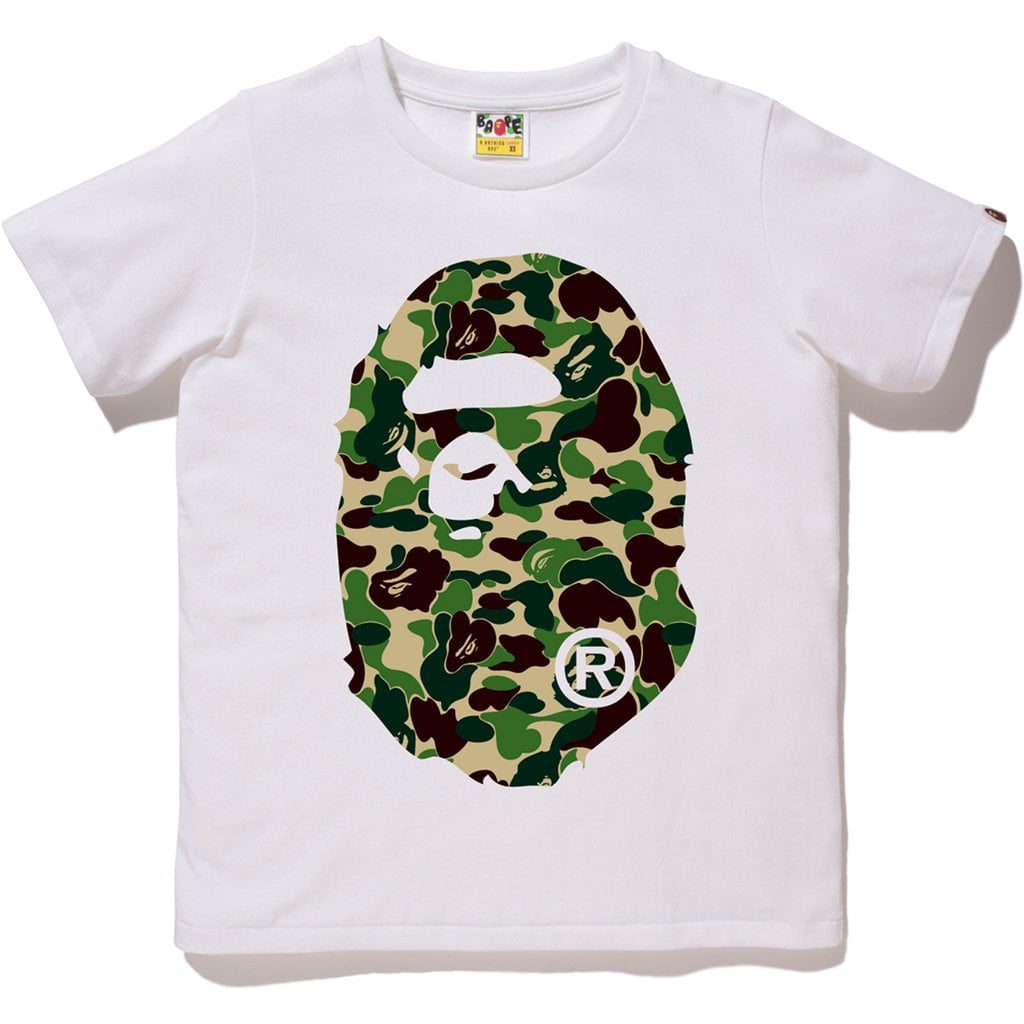 Most iconically, Bape’s rich rap influences led to the creation of the brand’s now iconic ABC camo, translating the paint-splodge pattern of Vietnamese duck-hunter camo into a bombastic, pop-art pattern that would be worn by virtually every iconic rapper of the past 30 years, including Clipse, Kanye West, Pharrell Williams and The Notorious B.I.G. 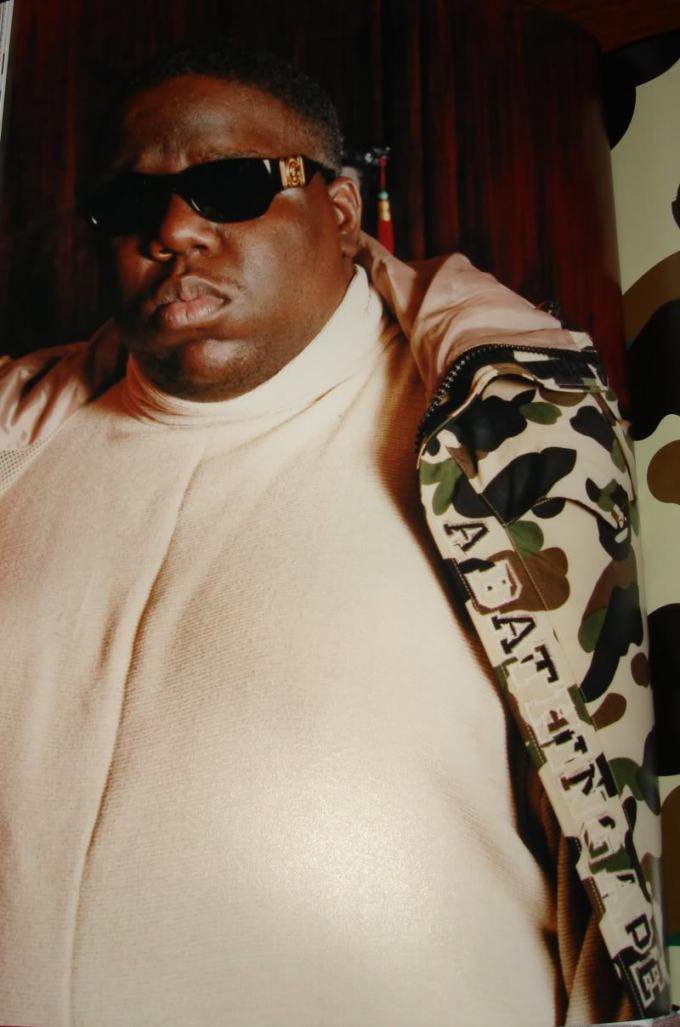 Since then, streetwear (and fashion at large) has been fascinated with camo in its seemingly-infinite forms. Though each individual pattern has its own history and use, that  connection of camo to broader culture means that every design also has its own relevance, as well as its own position in American military history.

But the most fascinating aspect of the use of camouflage in fashion is one I mentioned at the beginning of this piece – its use not as a means of hiding or concealing something, but as a means of standing out. Bape’s outrageous ABC camo, for example, would probably underperform at best in a woodland environment. In the concrete jungles where most people use it, however, it’s difficult to ignore. Likewise, the white, grey and purple pattern used in the collaboration between Sneakersnstuff and Converse (below) is a variation on traditional woodland camo designed for arctic environments, but the use of purple means the wearer is immediately exposed. 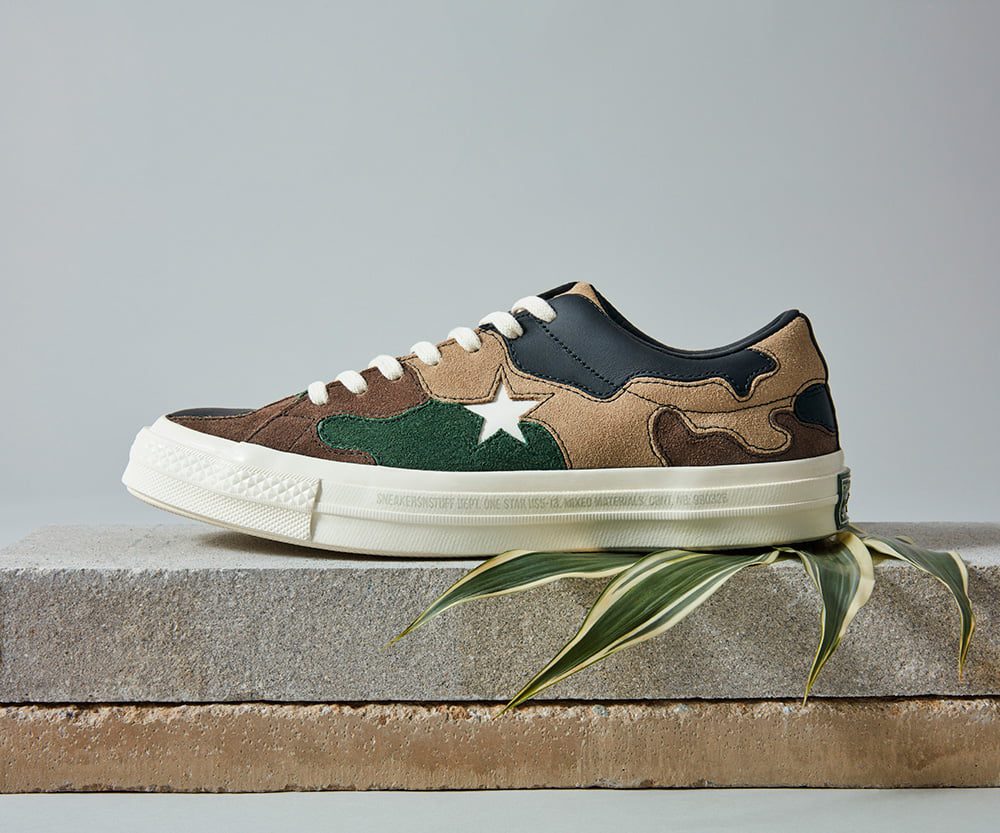 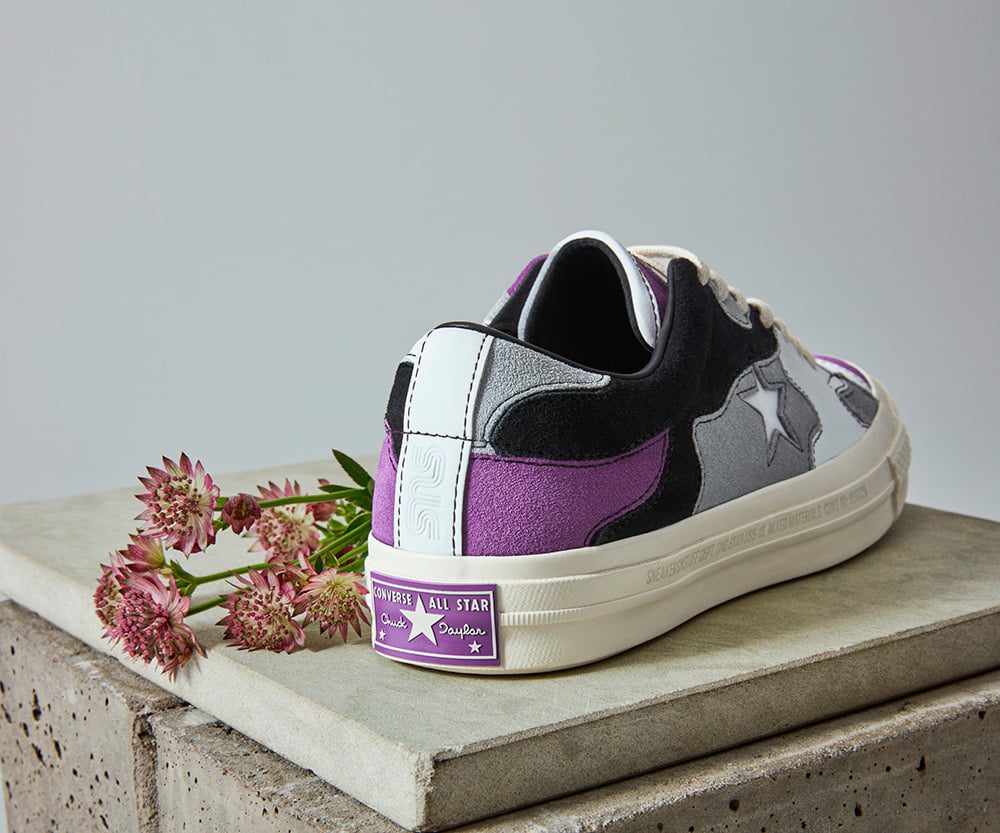 It reminds me of that quote by Japanese designer Yohji Yamamoto, who famously explained his love of the color black like this: ‘Black is modest and arrogant at the same time. Black is lazy and easy – but mysterious. But above all black says this: “I don’t bother you – don’t bother me”.’

Likewise, when we wear camo as a fashion choice, it speaks to a sort of contradiction that runs through the minds of many fashion enthusiasts; the desire to be seen, distinctive and noticeable, but to still be enigmatic and inconspicuous. By wearing camouflage, you can set yourself apart from the sea of pinstripe suits, black woolen overcoats and stonewashed denim that forms the backdrop of contemporary urban life.

But at the same time, you can assume a guise that says, by design, that you do not wish to be seen. It’s a uniform that immediately declares, “I do not want to be noticed or acknowledged within the crowd. When you look at this bustle of people buzzing their way through everyday life, you should not see me, as I am not one of them. I am merely infiltrating their ranks as I walk my own path.”

And then, in the same breath, it looks over the shoulder and says, “But you did see me, right?”

Article written by Gregk for Sneakersnstuff.