2015 was an amazing year for us at Sneakersnstuff. Great innovative sneakers were released, new friendships and connections were made and the interest in sneakers just kept growing! Just a few months after our store in London celebrated it’s first anniversary, we finally opened up our first store in France, in Paris no less. We had very high expectations for the opening in Paris, but we could never have guessed what a success it would become with the great influx of Parisians and other visitors!

Long story short – here’s the summary of our projects from 2015! 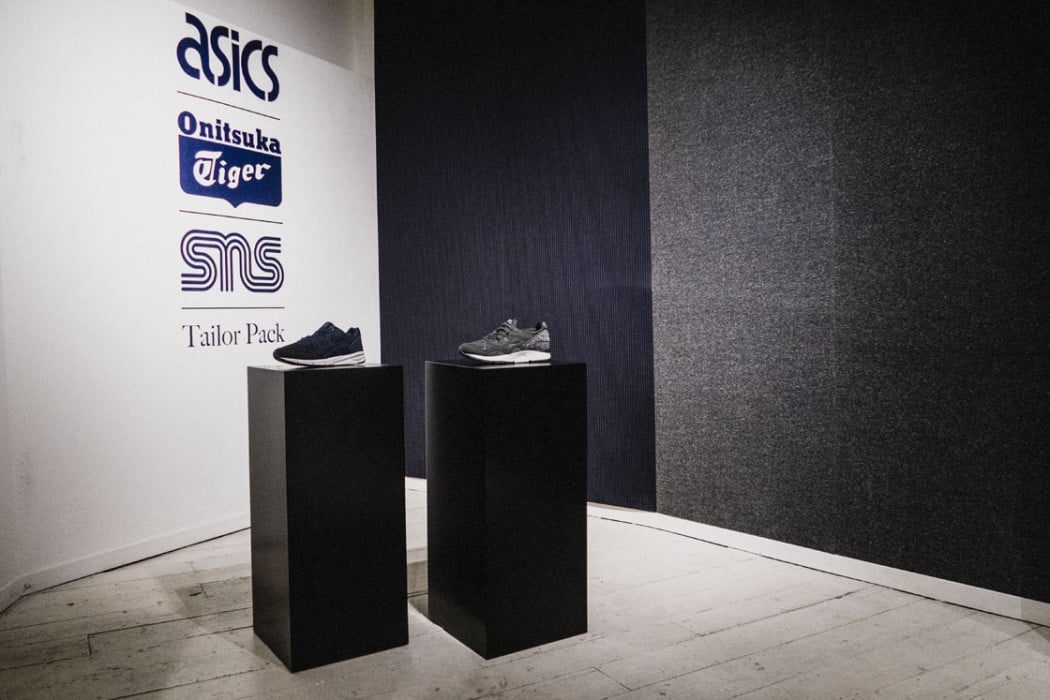 The Sneakersnstuff x ASICS x Onitsuka Tiger ”Tailor Pack” is our way of dressing up. When we opened up Sneakersnstuff 17 years ago, you were not allowed to wear sneakers when you were going to a club. And we never wanted to wear anything else but sneakers. So we named our opening party “Dresscode Sneakers” and did not let people in unless they had sneakers on.

More images of the “Tailor Pack” project can be found here and here. 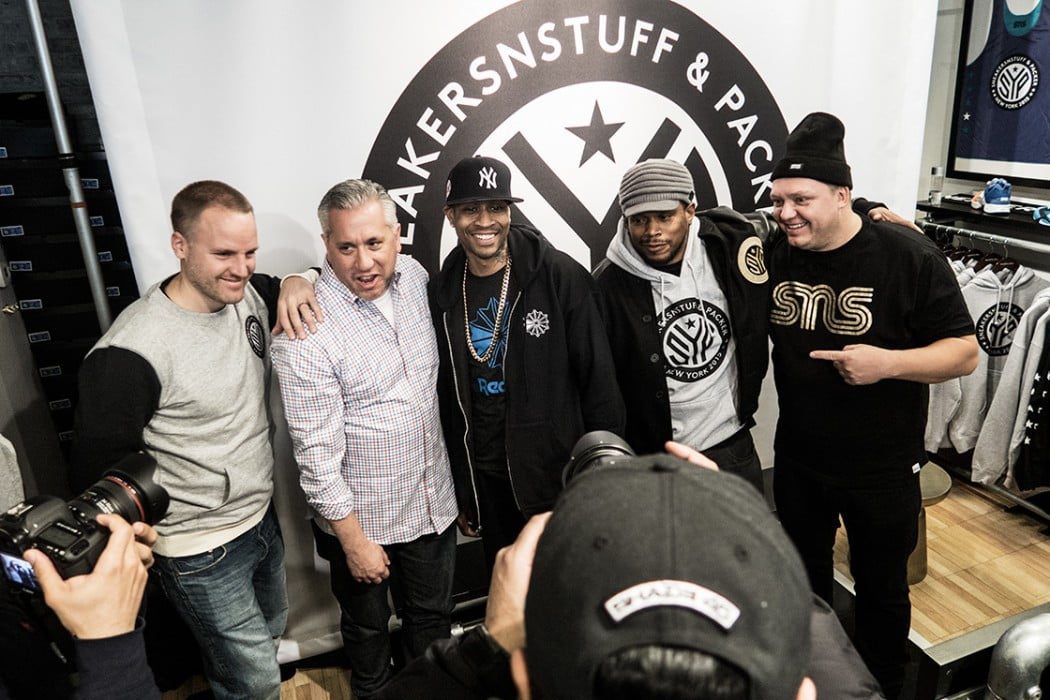 On February 11th 2015 we were in New York together with Packer Shoes to open the doors to the Token 38 pop up shop at Refinery Hotel on 38th street. A project that we had been working on for over a year and that we are very proud of. For the pop up shop we released three Reebok models each together with Packer Shoes, and a great collection of clothing together with Mitchell & Ness. We also produced a sneaker cleaning kit together with our friend Jason Markk. During that weekend we had some mayor people coming by the stores to say hi to fans and sign stuff. What do you say about Shaq, Allen Iverson, Shawn Kemp and Dominique Wilkins? We had an amazing time in New York!

Read more and find images of the “TOKEN38” project over here. 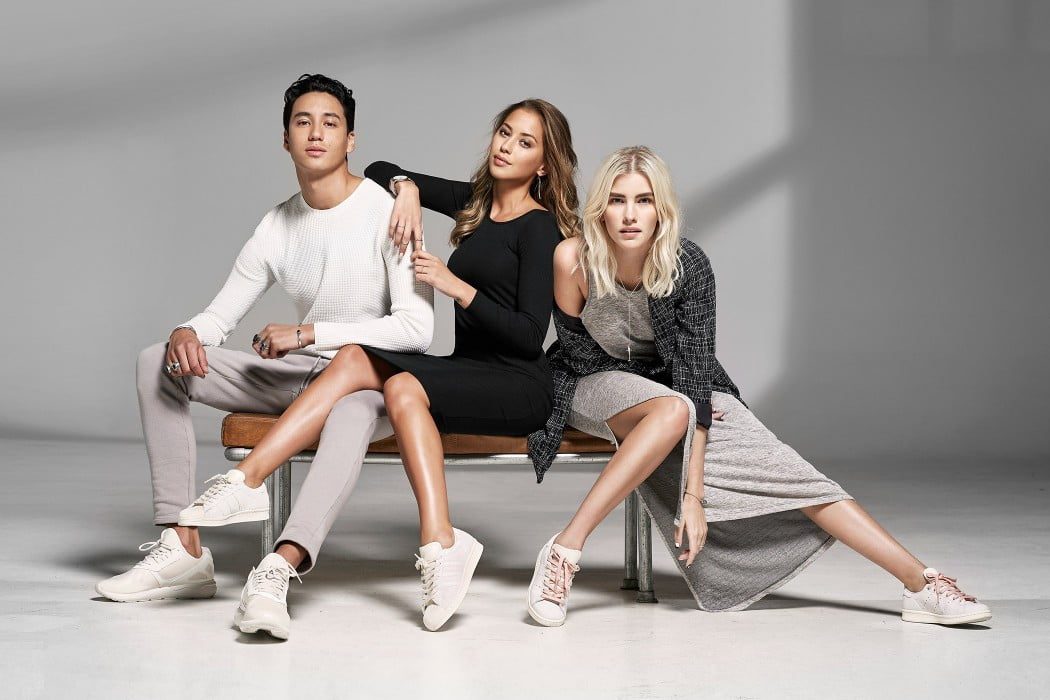 The most common tone of white in Stockholm houses and apartments has a little but of a mix between eggshell and grey in it. Not much, but just enough to break down the whiteness and tone it down a little bit. That shade of white is widely know as Stockholm White, or Stockholmsvitt. And that is where you have your base when it comes to decorating your home. You picture all your walls in Stockholmsvitt, and then you start to add details. A wallpaper here, and some colors there. Just as you normally go about planning what to wear. Stockholmsvitt is always very easy to match into whatever you feel like wearing. It is a staple color, and you can never have enough white sneakers to choose from in your closet, and you always realize that every spring. For this project we worked with three big influencers from Stockholm – Qhris Magsino, Elsa Ekman and Kenza.

More images of the “Shades of White” project can be found here, here and over here. 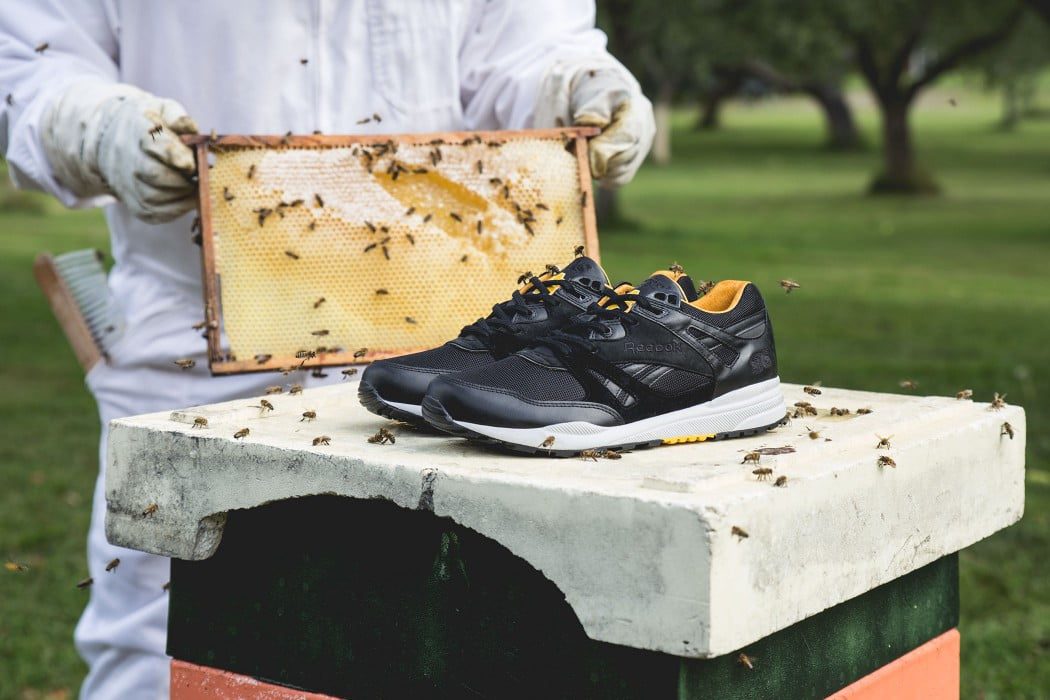 Reebok Ventilator were celebrating 25 years last year and we were very proud to be a part of that celebration. We remember launching these shoes back in the 90’s as one of the best running shoes that had been put out there at that time.

Mankind is on the verge of wiping out all bees in the world? “So what?” you might ask. “I never liked bees anyways and honey is disgusting”. Well, first of all – honey is actually very tasty. And secondly, and so much more important – if all bees go instinct, so will all the trees, flowers and plants that need pollination do as well. And if all flowers, fruit trees and bushes dies out, then guess what… mankind might die out as well. So it is kind of like a big deal.

So Reebok and Sneakersnstuff decided to buy into a beehive from Bee Urban. Bee Urban is based in Stockholm, and the idea is to get people and companies to sponsor beehives up on rooftops in the city. In return, besides saving the planet, you also get the honey that is harvested from your beehive. We strongly encourage all of you to also pitch in and help save the bees.

More images of the “Bees & Honey” project can be found here. 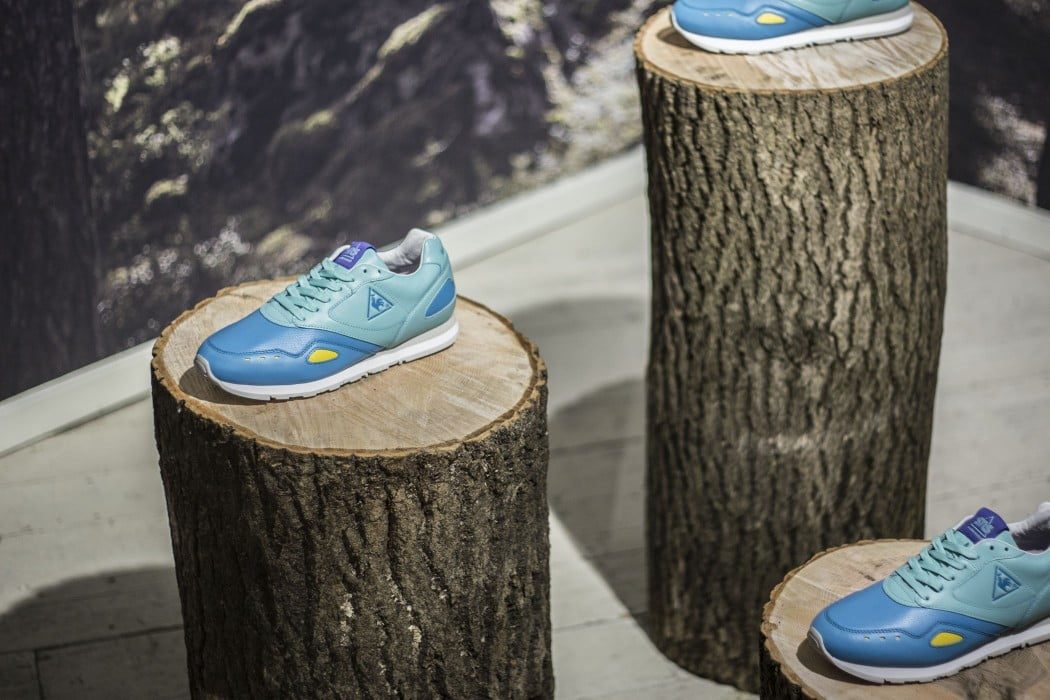 The Sneakersnstuff x le coq sportif Flash ”Dunderklumpen” takes inspiration from a classic old Swedish movie called just that – Dunderklumpen. Written by Beppe Wolgers and animated by Per Åhlin this classic movie from 1974 was the very first Swedish animated movie. Starring the mystic character Dunderklumpen who solves his loneliness by using his magic to bring toys to life. The only problem is that the toys belong to Camilla, the daughter of Beppe Wolgers, who is also starring in the movie. Beppe and his son Jens sets out to get Camilla’s toys back and you get to follow them through the Swedish midsummer night.

As a kid growing up in the 70s it is impossible not to have heard or seen anything by Beppe Wolgers. And the values and punch line of many of the tv-shows and movies that he was involved in has probably helped set a standard of moral and values for an entire generation.

More images of the “Dunderklumpen” project can be found here. 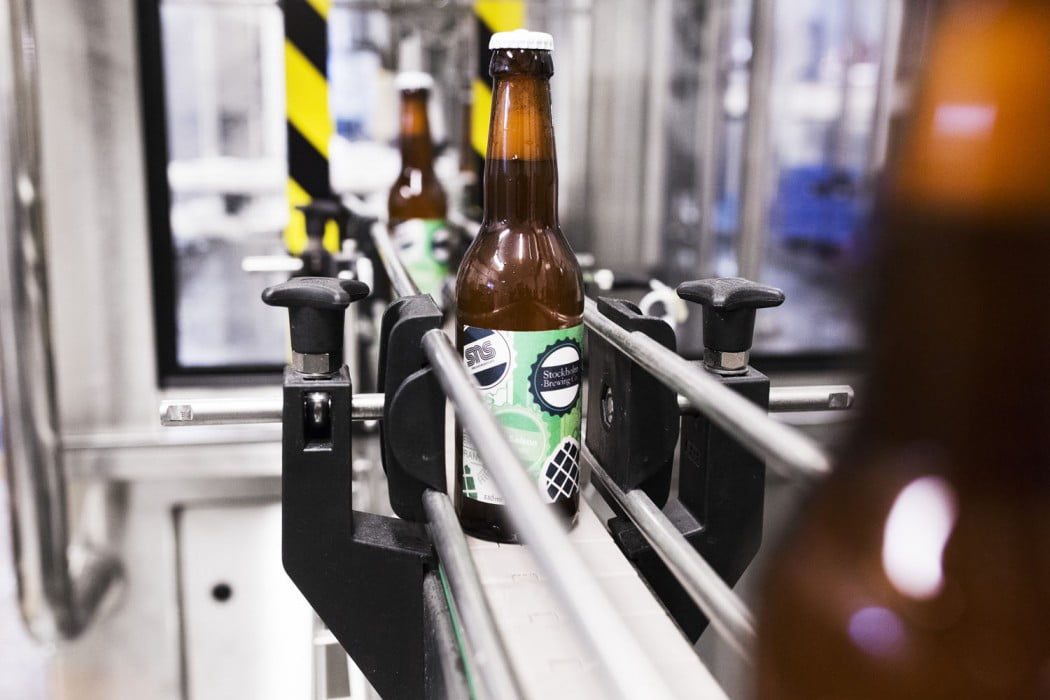 adidas Originals ”Brewery Pack”, a SMU pack from Sneakersnstuff, takes inspiration from the old brewery we have across the street from our store in Stockholm. Back in the 19th century, our entire block used to be a huge brewing company where you would find giant copper kettles, farmers bringing in malt and hops and of course bottles and bottles of beer.

Today there is no room for major brewing companies in the middle of the city, but we teamed up with the only brewing company that can be found in Södermalm today. Stockholm Brewing Co. was founded five years ago. A brewery that brings it back to the core by using organically grown ingredients and brewing the traditional way to enhance the flavor and character of the beer. And yes, of course we went ahead and produced our very own beer to match the adidas Originals ”Brewery Pack”.

More images of the “Brewery Pack” project can be found here. 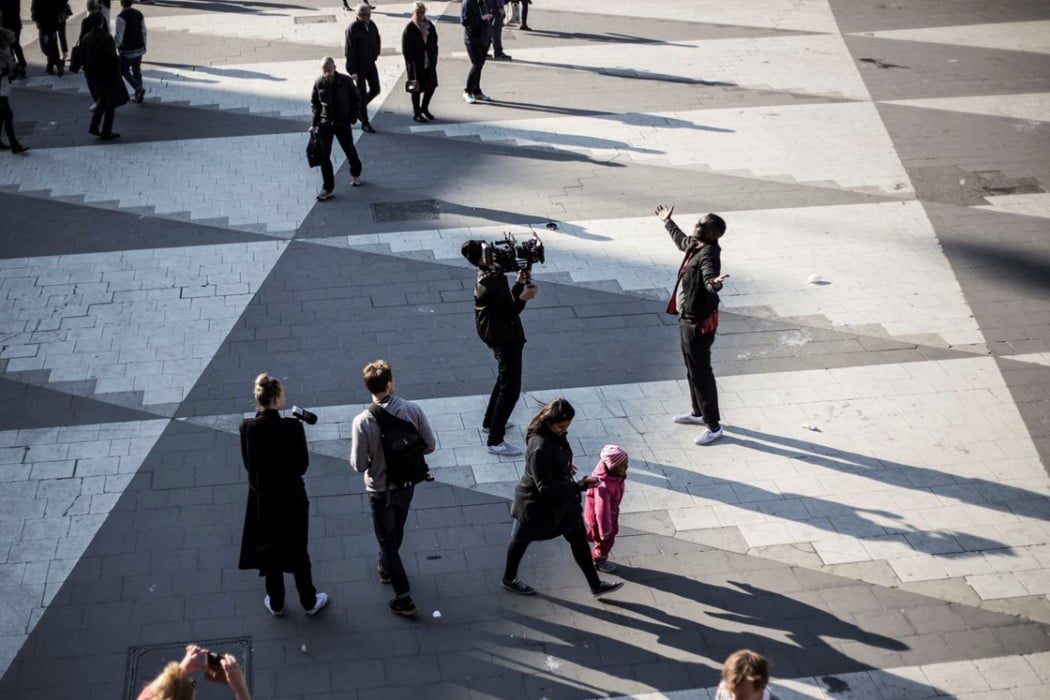 The Sneakersnstuff x Vans OG Classic Slip-On LX ”Stockholm” is our first collaboration with Vans. Of course we looked to our hometown for inspiration. When the skateboard culture first appeared in Stockholm it was on Sergels Torg, or Plattan as most people from Stockholm calls it, you would find it. Taking the iconic Vans Slip-On with its black and white checkerboard pattern and just twist it to celebrate Plattan as a classic landmark in Stockholm with its characteristic triangular black and white pattern felt like a very natural thing to do. For this release we also produced a skate deck (50 pieces worldwide) that was given away to friends & family.

More images of the Sneakersnstuff x Vans “Stockholm” project can be found here.

We went to space for inspiration of this SMU pack. In the Fifties, the early days of NASA, and on the very first human spaceflight by the United States, astronaut John Glenn brought his personal camera to take pictures when he was in space. The result was mediocre at best, and NASA realized the need for a more suitable and professional equipment.

After some research and first sketches of what would be needed, NASA discovered that the most efficient way would be to just buy a model of the Swedish camera manufacturer, Hasselblad, over the counter in a camera store in Houston. This marks the beginning of a collaboration between NASA and Hasselblad that has continued for over 50 years. The pictures you have seen of and from Space, has been taken with a Hasselblad camera.

But one series of those pictures taken in space will never be seen. In 1966, on NASA’s space program Gemini X, astronaut Michael Collins accidently lost the Hasselblad camera on his spacewalk. It is forever lost in space, possibly still in orbit around Earth. It’s called the first Swedish satellite.

Images of the “Swedish Satellite Pack” project can be found here.

When Erik and Peter started Sneakersnstuff back in the late 90’s they used to go to New York and search the city for sneakers that you couldn’t find in Europe. Sneakers that they could bring back to Sweden and sell in their store. They walked around Midtown, Brooklyn, Harlem – yeah they were all over the city just looking for good shoes.

There are two things that was always with them during these trips – their big black duffel bags that they used to carry home the sneakers and their passports. These items are also the inspiration behind the shoes in the PUMA ”Adventurer Pack”.

Images of the “Adventurer Pack” project can be found here. 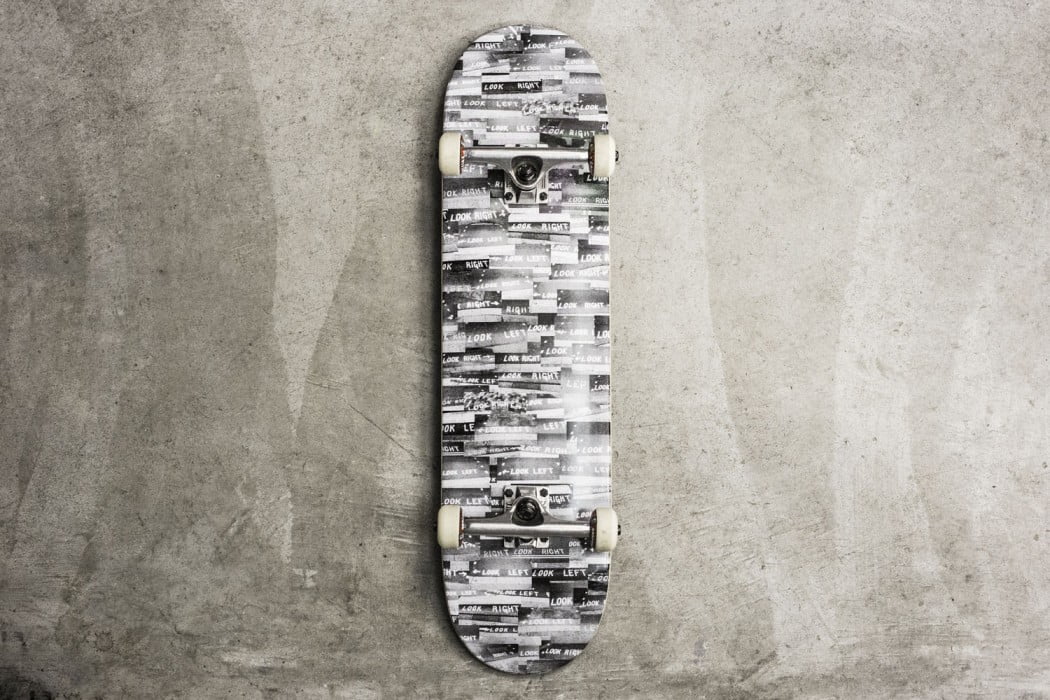 Since we opened up our store in Shoreditch we’ve had a bunch of near death experiences. Why you might think? Well, they do drive their cars on the ”wrong” side of the road! One thing we’ve learned is to look both right and left before walking over the street. You can’t be safe enough!

Both the Sneakersnstuff x Vans Old Skool LX ”London” and the Sneakersnstuff x Vans SK8-Hi LX ”London” are made in highland suede with a screen printed ”Look Left, Look Right” checkerboard pattern. Scotchgard™ Protector by 3M will keep you dry while walking the streets of London and both shoes comes with three sets of laces. The yellow and red accent colors comes from the single/double yellow lines and red routes on the roads in London. For this release we also produced a skate deck (50 pieces worldwide) that was sold and given away to friends & family.

Images of the Sneakersnstuff x Vans “London Pack” project can be found here. 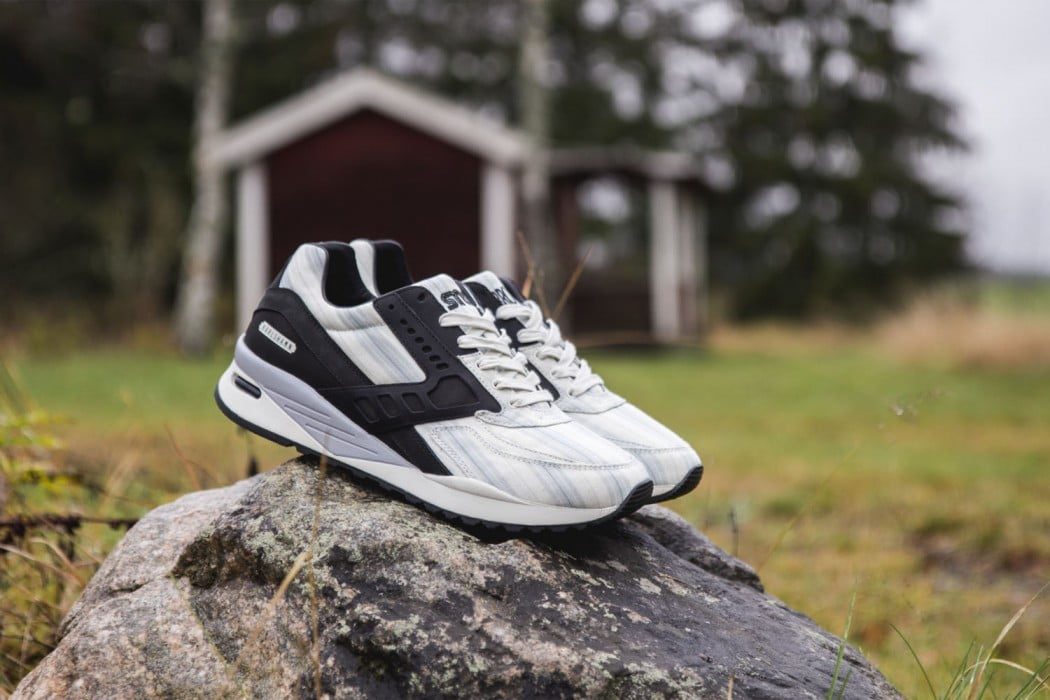 In the middle of the 19th century, times were rough in Sweden. Over a period of time, over 1 million people of the Swedish population left Sweden to search for a better life in America. In 1949, famous Swedish author Vilhelm Moberg, captured this in the classic book ”The Emigrants”. In 1971, the story about Karl-Oskar and his wife Kristina made it to the big screen and won both an Oscar and a Golden Globe for best foreign film.

The Sneakersnstuff x Brooks Regent ”American dream” takes inspiration from this classic Swedish movie and the scenes in it. The upper is made in a striped fabric, representing the clothes of the people moving to America in 1850’s.

More images of the “American Dream” project can be found here.